A Global Mindset At McDonald’s 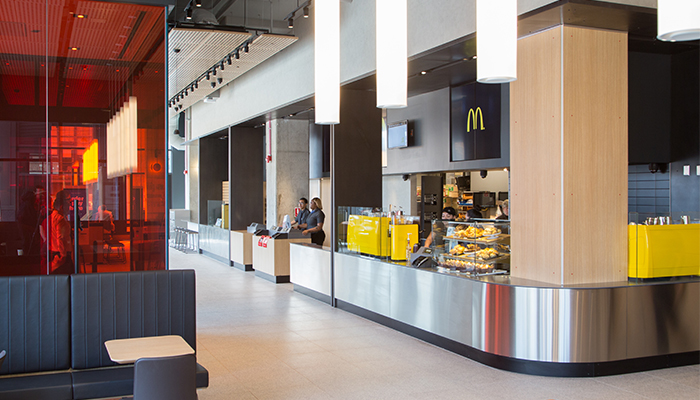 The world’s biggest restaurant chain is mapping out the future, introducing a plan to address global climate change, and opening a globally themed restaurant at its new Chicago headquarters.

In March, McDonald’s announced it’s setting approved science-based targets to reduce greenhouse gas emissions in its restaurants and offices by 36% by 2030 (from a 2015 base year). The chain also is committing to a 31% reduction in emissions intensity (per metric ton of food and packaging) across its supply chain by 2030 (also from 2015 levels). The combined target has been approved by the Science Based Targets initiative (SBTi).

In collaboration with its franchisees, suppliers and producers, McDonald’s will prioritize action on the largest segments of its carbon footprint: beef production; restaurant energy usage and sourcing; and packaging and waste, which collectively account for approximately 64% of McDonald’s global emissions. The chain anticipates its actions will prevent 150 million metric tons of greenhouse gas emissions from being released into the atmosphere by 2030, or the equivalent of removing 32 million passenger cars from U.S. streets for an entire year.

The chain’s just-opened restaurant on the ground floor of its new corporate headquarters (opening later this spring in Chicago’s West Loop neighborhood) also has a global mindset, specifically on its menu board. The McDonald’s around-the-world menu provides patrons a smorgasbord of rotating items from its global menus; it debuted in late April with loaded bacon and cheese fries (Australia), the McSpicy Chicken Sandwich (Hong Kong), Mighty Angus Burger (Canada), the McFlurry Prestígio (Brazil), and two salads from France.

The 6,000-sq.ft. unit features an illuminated wall map to showcase the location of the international locales featured on the rotating menu. The modern “Experience of the Future” look boasts contemporary furniture and fixtures, a pickup counter for UberEats, and a handful of self-ordering kiosks. To date, McDonald’s has transformed nearly 3,000 units in the U.S. to the new design, either through remodels or rebuilds, and plans to transform most all U.S. restaurants to Experience of the Future by 2020.

The restaurant precedes the opening of McDonald’s headquarters later this spring. The nine-story building will house McDonald’s corporate offices and Hamburger University, one of seven worldwide locations that provides state-of-the-art training for the company’s employees.