BACK STORY: Down The Drain 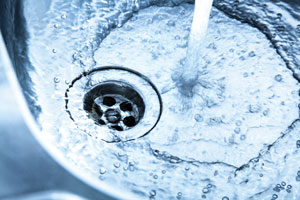 One of the ovens at a local bakery needed emergency repair during the overnight shift. The owner of the bakery said to come at 2 a.m., but “what’s the harm in coming early?” thought Terry Martin, who at the time was early in his career with Commercial Appliance Parts & Service in Tampa, Fla.

He soon found out when he entered the bakery’s back door and heard the sounds of water splashing in another room. Turning the corner, he found the bakery owner soaking in the basin of a powered pot wash sink, warm water running at full blast.

Using a pot wash sink as a jacuzzi, while humorous (and awful), is rare, but the true story does nicely draw attention to the fact that the average commercial sink and sinks of all sorts go through a lot of use and abuse in their lifetime and can too often be used as a dumping ground for waste that should be carried off by professional servicers, not sent down the drain. Fats, oils and grease (FOG) are the worst culprits.

In 2017, The Guardian chronicled an especially vicious backup it named the Fatburg in London’s sewer system that reportedly weighed 130 metric tons (286,600 lb.) and cost millions of Euros to remove over the course of a month.

Experts estimated that 90% of the backup was caused by restaurants failing to dispose of their FOG properly, either by having a service pick up used fats and oils, running FOG through a grease trap or disposing of FOG in a bin or other receptacle for proper disposal. Grease traps are mandated in the U.S., but they have to be maintained or you risk a disgusting backup into your restaurant and you’ll need to close for a few days to clean the mess. Many states carry huge fines for failing to manage FOG disposal. The rule of thumb is get the trap emptied by a professional service when it’s a quarter full of FOG.

Train employees on proper FOG disposal, put signs up by sinks to warn against dumping grease and oil down the drain, invest in grease collection systems—including those that connect to combi ovens and rotisseries—and contract with oil recyclers and grease-trap servicers.