Automation, efficiency and accessibility are top of mind in the armed services. 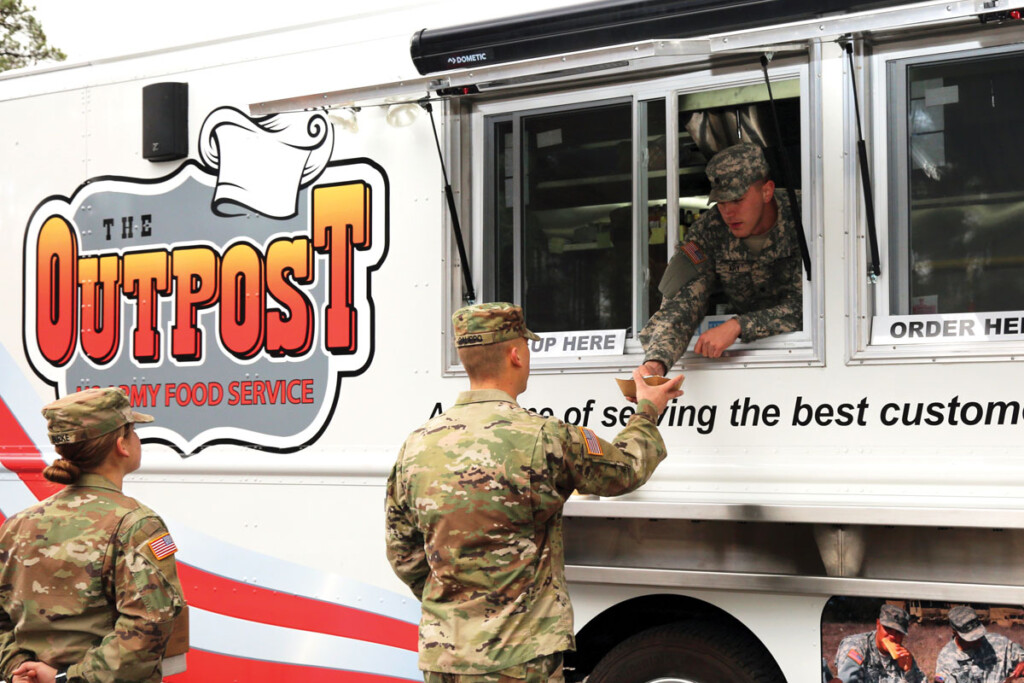 When you think of military foodservice, you might envision the traditional mess hall, with thousands of meals served to troops in mere minutes before the kitchen staff moves on to prepare for the next meal period. And while that certainly is the case at many dining facilities on U.S. Army, U.S. Naval and U.S. Air Force bases, this segment is more varied than meets the eye.

Some facilities have carryout and drive-thru options, while others aren’t what you would consider high-volume at all. Doug Huber, principal at Foodservice Consultants Studio, is working on renovations for dining facilities at U.S. Coast Guard units that each serve around 50 Coast Guardsmen living there.

At other facilities, service members aren’t the only diners. “At any Air Force base, it’s the person that’s putting fuel in the plane … the security forces, the firemen, [the workers] maintaining aircraft. Those are the people that I need to feed,” says Jim Krueger Jr., who works as chief of Air Force food and beverage policy, procedures and strategic initiatives at the Air Force Services Center. Military academies, on the other hand, often have catering kitchens focused on events for guests. “We are working on a project at a Naval Academy that is a major catering kitchen for all the catering events on the Naval Academy property, which is completely different than the mess hall,” Huber says. “It’s for events that might be 20 people up to 2,000.”

All that said, there are a few things military dining operations have in common: They value American-made, durable, low-maintenance equipment that keeps operations moving efficiently. 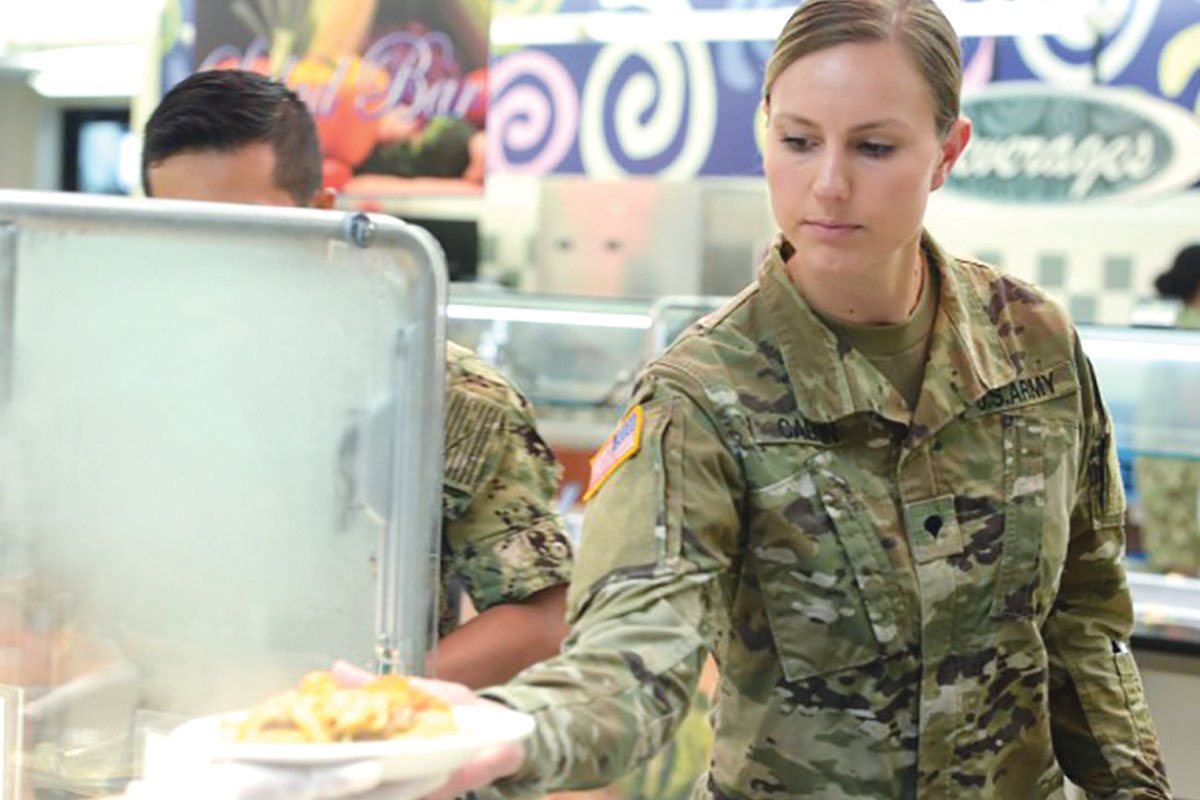 “There are a lot of factors that go into whether this segment is going to grow or shrink or stay the same [in terms of the size and number of facilities]—some of which are political; it depends on the administration,” says Huber, who also worked on the Wounded Warrior Care Center at the Walter Reed National Military Medical Center in Bethesda, Md. “It also depends on the worldwide climate.”

Growth or lack of it aside, change is definitely afoot. The U.S. Army launched the Food Service Modernization Program in 2019; some of its goals include improving menu selection and making dining more accessible with expanded hours of operation and mobile options such as kiosks and food trucks, according to the U.S. Army’s website. 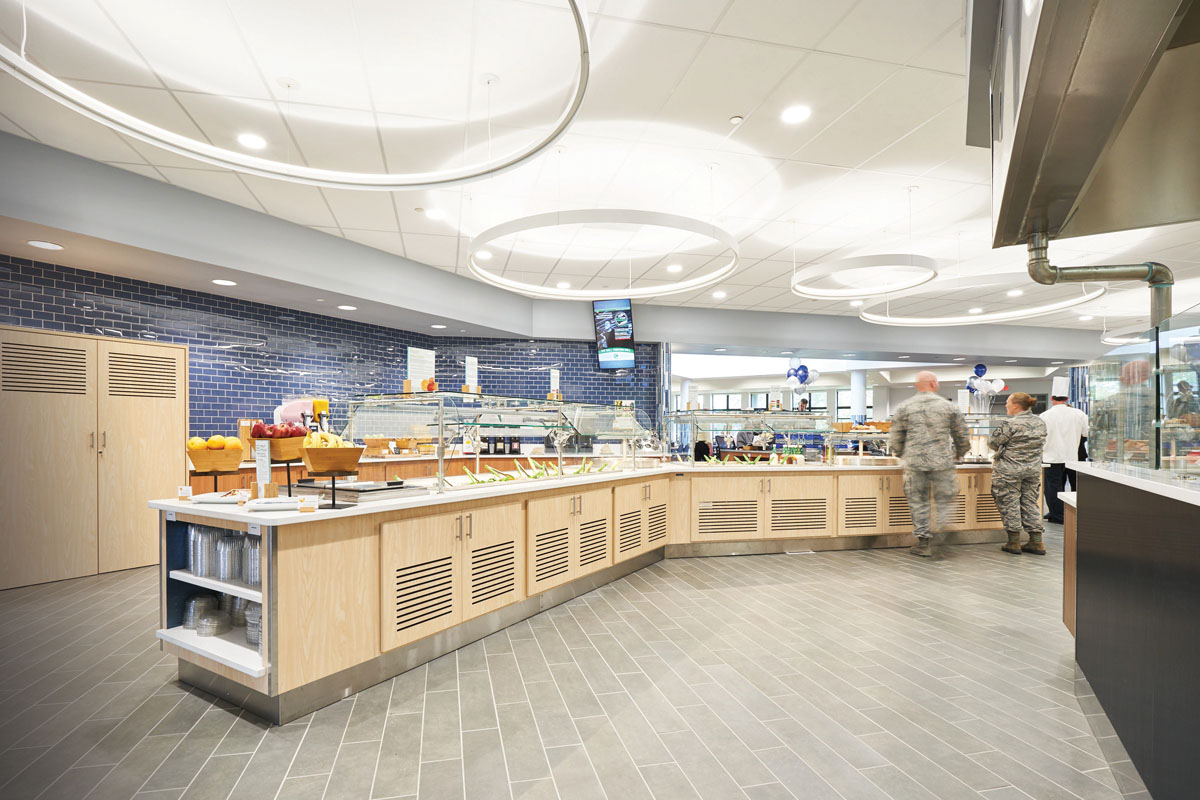 A buffet awaits at the Halvorsen Hall Dining Facility at Joint Base McGuire-Dix-Lakehurst in N.J. Photo Courtesy of TriMark

Existing facilities also will continue to need renovations and revamps, and that work is planned far in advance. Ryan Mikita, principal at Ricca Design Studios, is working on a feasibility study for a new dining facility at the U.S. Military Academy at West Point that would likely kick off 10 years from now. “We are doing the high-level estimating and … putting together a study that they can send to the government for approval to unlock the capital funds,” Mikita says. The facility will support scratch cooking, a shift from the current third-party operator model, he says. “[Currently] everything has been prepackaged and pre-chopped,” Mikita says. “When this renovation happens, we want to be in a place where all of the purveyors are bringing in fresh product and it’s more of a made-to-order sort of program.”

>>The U.S. Army launched the food truck program in 2017 to help serve personnel who don’t have time to visit dining facilities. Fort Stewart in Georgia was the first to test the program and trucks are now in several locations, including Hawaii and Germany, according to the U.S. Army’s website.

>>Automation has the potential to help high-volume operations, especially. “As technology evolves, the ability to automate some of the prep, storage and cooking would be beneficial to their operations,” says Camacho Associates Project Manager Brett Daniel, who has worked on dining facilities at Fort Stewart and Fort Bragg in recent years. “They typically have such high volume in bursts, the ability to move the staff from some of the more labor-intensive work into replenishing serving lines and facilitating a faster throughput on the serving lines would not only help the operators, but benefit the diners with more time to sit down and eat.”

“The dishroom, it’s the noisiest place that nobody wants to work in. Now it’s designed for a human; everything is horizontal. Could some of it be vertical? … Right now, the staff is still in there breaking down the tray, but who’s to say a couple of robot arms couldn’t figure out electronically and ‘see,’ here’s a plate, here’s a cup. Could they, in fact, put it in a rack?”

>>Krueger thinks back-of-house operations are ripe for robotic solutions. “The dishroom, it’s the noisiest place that nobody wants to work in. Now it’s designed for a human; everything is horizontal. Could some of it be vertical? You look at robotics in car manufacturing or at Amazon—that’s three-dimensional,” he says. “Right now, the staff is still in there breaking down the tray, but who’s to say a couple of robot arms couldn’t figure out electronically and ‘see,’ here’s a plate, here’s a cup. Could they, in fact, put it in a rack?”

>>Low-maintenance and no-maintenance equipment is in demand. “Ventilation has been a challenge,” Huber says. “I did some work for the Marine Corps and what they told me is, ‘We need something that works without any maintenance.’ … If you were to use calculus and graph usability, cost and maintenance in a 3D graph, they would want to maximize usability and minimize cost and maintenance. If they didn’t have to change filters, they’d be all over that.”

4: The number of ready-to-eat vegetarian meal options available for troops in the field without access to dining facilities.2

7,409: How many pounds of turkey were prepared for cadets at West Point for Thanksgiving dinner in 2020. 3

200: The number of soldiers that The Culinary Outpost, the U.S. Army’s food truck in Hawaii, can serve in one meal period.4 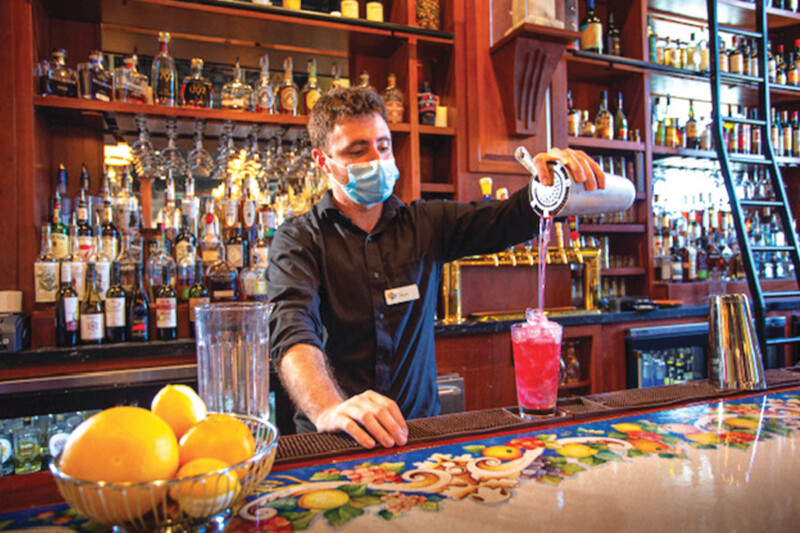 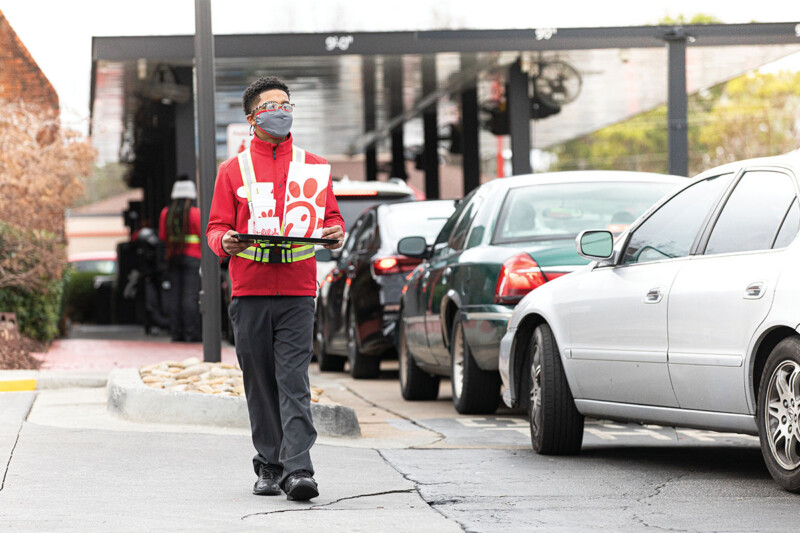