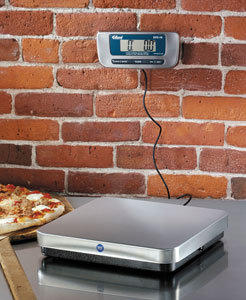 Whether you’re putting buttercream icing on a cake or pepperoni on a pizza, keeping a check on the ingredient amounts you use goes a long way toward controlling food costs. While portion-control or ingredient scales might make up just a small part of your overall equipment budget, they play an important role in your kitchen. These scales add accuracy and efficiency to your operation, leading to cost savings and satisfied customers.

When it comes to portion-control scales, you typically have three options:

Baker’s beam: This is your classic scale, like the one used to symbolize the scales of justice. The basic principle is it’s a beam with two platforms, where you place a known weight on one side and add ingredients to the other until the beam is level. It’s still the preferred option for many chefs and bakers who enjoy the simplicity, the ease of care and the reliability.

Mechanical: Sometimes called top-loading or dial scales, these scales are popular for their simplicity also, and are usually a lower cost option than beam or digital scales. Durability is another advantage, with most built to survive employees who slam slabs of meat or large portions of dough on the platform, or even accidentally knock it off the counter a few times. The scales range in capacity from 2 lb. up to 70 lb., reading in 1/4-oz. to 1/8-oz. increments.

Digital: As the name implies, digital scales provide a digital readout, making it easy to read at a fast pace. Ranging in capacities similar to mechanical scales, from 2 lb. to 66 lb., they provide greater accuracy than mechanical scales, with readings in .1-oz. increments.

Weighing The Options
Most manufacturers recommend one scale per station and at least one backup. Even though most scales come with a one- to two-year warranty, it’s good to have an extra around for emergencies. “If an employee slams a scale up against the wall or drops it on the floor and it goes down on a Friday, you’re not going to be able to get a replacement delivered that night, and you’ll be going through a lot of food,” one maker says.

Wondering whether to go with a 2-lb. scale or a 15-lb. scale? That depends on what you’ll be weighing. Portioning out green peppers or onions for tacos can be done on a scale with just a few-pounds capacity, but if you’re weighing entire hams or turkeys, opt for a higher capacity. Be sure to get the right scale for the job—putting on more weight than a scale is built for is a sure way to break it.

Deciding which type of scale to buy depends on your own preference as well as what you will be doing with the scale. Mechanical scales are often used in concession stands and fast-food operations where employees measure a lot of food quickly. If counter space is an issue—making it so staff members might accidentally knock a scale on the floor in a tight, rushed kitchen—opt for a durable mechanical scale.

Digital scales make sense where very precise accuracy is critical, in kitchens where you’re making dishes with expensive ingredients or the recipe requires very precise measurements. These scales also offer more options when it comes to the type of readout. For scales where the readout is on the base, it’s usually a ½-in. LCD display for large, clear numbers. Some models offer a back-lit option to improve readability. Digital scales run on batteries, mostly rechargeable, or AC adapters that you plug into an outlet; baker’s beams and mechanical scales don’t require a power source.

Tower, remote and wireless readouts provide even more flexibility. Place stockpots on the platform and be able to see the results at eye level. Some tower scales measuring 12-in. high come with readouts up to 1½-in. high.

Remote and wireless options allow you to place the weight display where it’s most convenient rather than affixed to the scale. For example, if you weigh a large pizza on a typical scale, you may have a hard time seeing the readout underneath. Plus, the pizza may knock up against the tower. Remote or wireless models let you place the readout on the wall—out of the way of product and at eye level.

Wireless models are a good choice when you need flexibility to move the scale around to different areas, or if the wires to the display could get in the way of food prep. One thing to keep in mind is that each wireless scale needs its own dedicated wireless network channel to maintain optimal signal strength, so if you require multiple scales, and interference is an issue, remote, wired models might be the better choice.

When it comes to finishes, most digital and mechanical scales have stainless platforms and plastic bases, while a few are all stainless. Baker’s beams offer more finishes, with a choice of epoxy powder coat, baked enamel or stainless. The stainless option is more expensive, but will not succumb to corrosion over time.

Enhanced Features
A scale’s primary function is to provide a weight, and that feature hasn’t changed. But there are some exciting, newer features in portion-control scales, in addition to wireless readouts, that can help improve accuracy and efficiency. Some options to look for include:

• Adjustable dash pot. Some mechanical scales have this feature to make the dial bounce less, allowing for greater speeds with portioning.

• Hands-free technology. Tare back to zero with a wave of the hand, thanks to motion detecting technology. That way you can keep building, measuring each ingredient, even if your hands are greasy or full.

• Aquatronic feature. This measures volume in addition to weight, providing the ability to measure fluid ounces of ingredients such as water or oil.

• Counting feature. Make inventory easy by putting one item on the scale for measurement, and then adding the entire box for an automatic count of how many you have.

• Over-size platforms. Choose this feature if you want to make an entire pizza on the scale, or are weighing large items on a regular basis.

• Rotating platforms. One manufacturer has introduced a platform that rotates 360°. This is a great feature for bakeries, allowing you to ice a cake right on the scale and to always be aware of the amount of icing you’re using. It’s also helpful for pizzas or any large items where turning the product makes food prep easier.

• Auto shut-off. Whether you’ve got your digital scale plugged in or you’re using your rechargeable battery, conserving energy is important.

Keeping It Clean
The best way to keep a scale in working order is to keep it clean. Regular wipe-downs are a must, but there are some other ways to help prevent the grease and dough from getting caked on the display or seeping into the workings of the scale. If you’ll be weighing juicy cuts of meats or greasy items, look for a platform with a drip tray, an indention that keeps juices off the base. One manufacturer has introduced a line of digital scales with a removable shield that fits over the readout to keep ingredients off during use, and can be thrown in the dishmachine at night to keep it clean.

In addition to regular wipe-downs, some operations might call for a more thorough cleaning of scales. Most mechanical scales can be washed in the sink, and one manufacturer has scales that can be run through the dishmachine. Digital scales are not dishwasher safe because the high heat ruins the display mechanism, but some makers offer water-tight, submersible scales that you can safely put in the sink or use in moist environments.

When it comes to purchasing portion or ingredient scales, cost is often the major factor in decision making. But by carefully considering your particular situation and what you’ll be using the scales for, the additional features that increase your initial investment might end up saving you money over time, whether it’s in more accurate ingredient use, better energy conservation or more efficient food preparation.

For a list of scale suppliers, visit the FER Buyers Guide at fermag.com.

Accuracy Is Priority
Portion-control or ingredient scales can only manage costs if the scales are accurate. Follow these recommendations to make sure you’re controlling costs with each use of your scale:

Check the weight. Suppliers have varying recommendations on how often to check a scale’s accuracy. Some recommend every six months, while others say once a week. Always check it after someone has dropped it. The schedule you set depends on how often you use the scale and how important accuracy is in your establishment. To check the weight, use a known weight and place it in the middle of your scale. This doesn’t mean grabbing a pound of butter out of the refrigerator, but actually purchasing a weight to use for this purpose.

Calibrate the scale. If your scale isn’t measuring at zero, it’s time to recalibrate. At least one manufacturer makes mechanical scales with a calibrating feature, which involves accessing the spring so you can adjust it through a hole in the back. On others, you can move a knob, but keep in mind this isn’t calibrating. With digital scales, some have a feature that allows them to zero out. Calibrate others with a simple procedure found in your instruction manual, or call the manufacturer’s technical support for a rundown of the recalibration process. 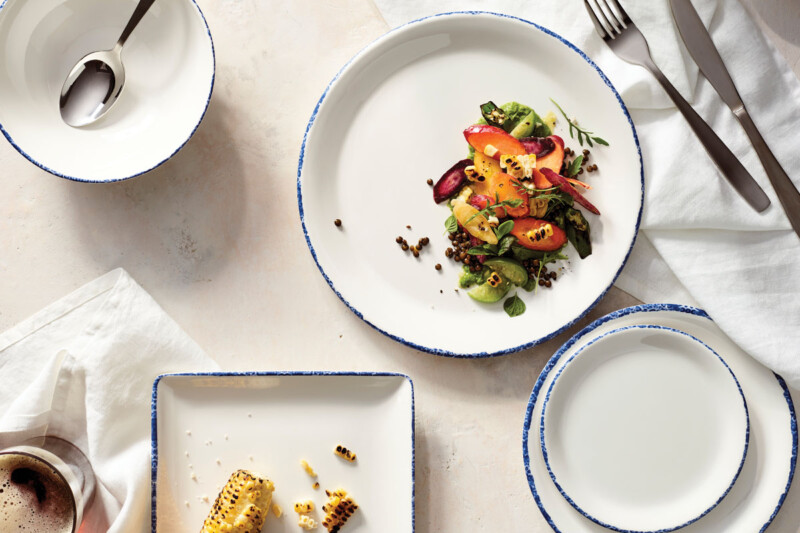 Patio season takes on even greater importance this year as social distancing puts a premium on outdoor seating. Operators expanding outdoor dining may look to melamine tabletop items, which are… 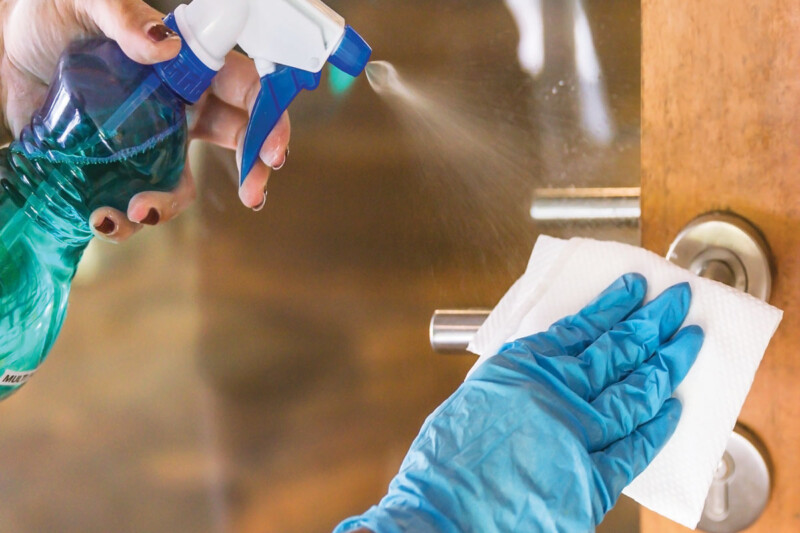 Simple Tips for Cleaning During COVID-19

The easiest fixes still are the most effective. 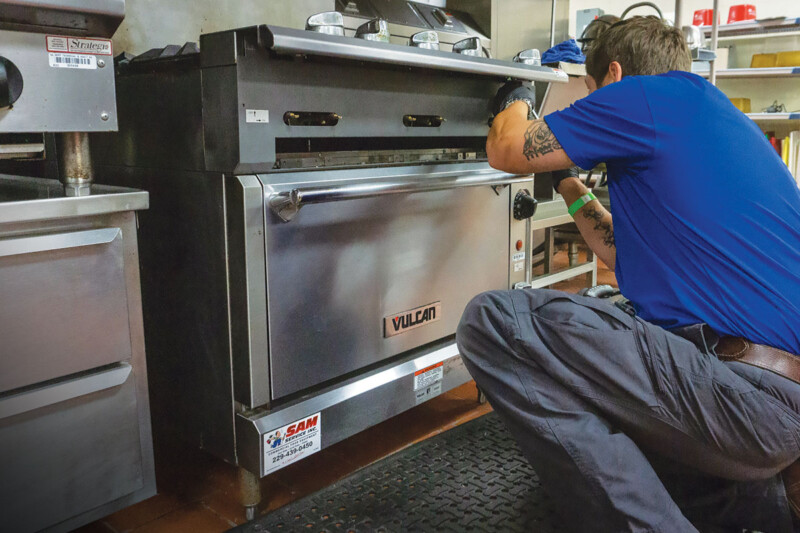