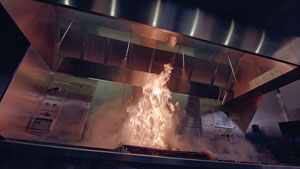 Back in the day, the exhaust hood was just a box to pull hot, smoky, grease-laden air off the cookline, filter it and route it through a duct to the outside.

But there’s a lot more to commercial kitchen ventilation hoods today than there was even a few years ago.

Type I hoods (the sort that collect hot, grease-laden air from heavy-cooking equipment, as opposed to the Type II condensate versions that collect moist, warm air from steamers, warewashers and the like) now come with options that save on labor costs, improve safety and boost energy efficiency.

Demand control kitchen ventilation: HVAC expert Steve Melink had an idea some 25 years ago while crawling on the roof of a restaurant on a 100°F day.

With nobody in the parking lot and no customers in the dining room, he was bothered by the cold conditioned air blowing pointlessly out of an exhaust duct on top of the building. His goal: find a way to sense when cooking was and wasn’t occurring under an exhaust hood and make it so the fan speed would adjust accordingly. That was the origin of the Intelli-Hood, the first demand controlled kitchen ventilation, or DCKV system, which the Melink Corp. offers as an add-on or retrofit to other manufacturers’ exhaust systems. The company also partners with OEMs that incorporate its system in their own hoods.

The original concept uses temperature sensors located in the hood canopy or duct and an optical beam that senses particulates suspended in the smoke and steam hovering in the air above the cooking surface. There’s an air purge system to keep the optical sensors clean, an alert that tells staff when it’s time to manually clean the sensors, and an algorithm that lets the system learn cooking patterns over time. Today, you can remotely monitor sensor data; systems allow for DCKV performance to be integrated into a building-wide, computer-controlled energy management system.

Some manufacturers of kitchen hoods offer their own DCKV systems using similar technologies or new modifications. In addition to an optical smoke sensor or temperature sensors (that sense either air temperature or, in one case, an infrared sensor that measures the temperature of the cooking surface), one manufacturer uses a clip-on electrical current sensor attached to the electric-or gas-cooking equipment to track when the heating element or gas valve is on or off. Another company’s system senses the temperature of incoming makeup air (which varies seasonally as well as with alterations in equipment or menu), then adjusts the fans to operate at different speeds to introduce more or less ambient air. Since the system is designed to adjust to changing temperature conditions over time, there is no need to recommission or adjust the ventilation parameters when a new piece of equipment installs under the hood. Newer DCKV systems can operate multiple fans under one hood or multiple hoods under one fan, with damper systems opening and closing as needed.

“Demand control ventilation has been a big push,” says Rich Swierczyna, Senior Engineer/Commercial Kitchen Ventilation Manager for Frontier Energy and the PG&E Food Service Technology Center. “A large institutional kitchen can have a constant volume ventilation system operating at 30,000 cfm. DCKV is a technological way to reduce exhaust air volume and cost by modulating exhaust rates during the day when you’re not cooking with all appliances or during downtime. Reducing exhaust airflow by 30% to 50% can reduce exhaust energy 50% to 90%. In addition to fan energy, you see savings on the supply side as well, since you don’t need as much cooled or heated makeup air coming in. It works in Miami just as well as in Duluth, Minn.” However, despite price drops in recent years, these systems remain expensive, so industry adoption has been slow.

Energy recovery: DCKV controls costs when there’s little or no cooking going on under the hood. In contrast, an energy recovery filter system helps save money when heavy cooking’s in full swing. Savings are greatest when DCKV and energy recovery are used together.

The energy recovery filter system uses an integral heat exchanger in the hood filters, allowing the waste heat in the exhaust airstream above the cooking surface to pre-heat incoming cold water for the water heater. Bonus: a cooler temperature where the grease-laden air hits the filters allows more grease droplets to be captured and not baked on, so the duct system doesn’t have to be cleaned as often and is easier to clean in general.

Self-cleaning hoods: This technology has been around for more than a decade, but one new system offers greater efficiency. The system washes in place both sides of the filter and the inside of the exhaust plenum with water and detergent at the push of a button. This eliminates the need for employees to take down and clean the filters every day. Self-cleaning hoods save labor and avoid the risk that results when employees climb up on equipment to get at the filters. Additionally, self-cleaning hoods reduce grease buildup, lowering the fire risk. Even with self-cleaning systems, however, operators still need to remove filters every couple of months for professional cleaning and to maintain the fire suppression system.

One technology company has introduced a cleaning system for not just hoods but flues and fans as well. The system automatically—and this is key—regularly sprays them with degreaser and water, inhibiting the buildup of grease. The system eliminates the need for manual cleaning because it covers the entire exhaust system whereas self-cleaning hoods only take care of the hood portion. (The entire exhaust system must be clean to meet code.)

Air purification systems: Hoods that feature UV light, electrostatic precipitators or a complex baffle design in filters help clean the exhaust air before it hits the ducts. For locations where it’s especially important to scrub cooking odors (such as a resort or a high-density urban area), one company offers pollution control integrated into canopy hoods, taking the place of a bulky pollution control unit in a mechanical room or on a rooftop. But one maker notes its stand-alone unit sports two to three electrostatic precipitator cells for odor to pass through before being released into the environment whereas an integrated unit only has room for one cell.

Fire protection: While fire suppression systems are standard with Type I hoods, one company touts an electronically activated system that uses an unlimited supply of water and surfactant to quickly suppress fires.

Hood shape and filter placement: When considering high-tech add-ons, don’t forget options for the hood itself. The hood’s shape is important in determining how exhaust air will roll around before it’s finally sucked into the fan. Just adding side panels substantially improves air capture (see fishnick.com/ventilation/ventilationlab/video/). A performance enhancing lip at the front of the hood also serves to redirect airflow, improving exhaust capture. One company adds air jets to the perimeter of its hoods to help corral the exhaust with reduced airflow. Moving the filter from the rear of the hood to the front also improves the air capture in some cases—and makes the filter easier to remove for cleaning.

CaptiveAire’s CORE Fire Protection System measures temperature and temperature-rise rate to respond faster in fire-risk situations than traditional fusible-link technology. And unlike systems that rely on liquid fire suppressing chemicals—and a limited water supply—CORE uses a surfactant and unlimited water. The result makes cleanup after an incident much easier.

Accurex’s self-cleaning Auto Scrubber hood system cleans both sides of the filters in place along with the inside of the exhaust plenum, eliminating the need for daily removal and cleaning. The reduction of grease buildup on the filters, ductwork and fans decreases the risk of fire as well. The Auto Scrubber is ideal for heavy-grease-producing appliances such as charbroilers, woks, fryers and griddles; facilities with long duct runs; and facilities with long hours of operation.

Accurex’s Grease Trapper ESP Pollution Control Unit better removes grease and smoke and is easier to maintain. As air enters the ESP cell it passes by an ionizer that positively charges the particles in the airstream. Then in the collector portion of the cell, the particles are attracted to negatively charged plates. The plates capture and remove the contaminants from the airstream, eliminating the need to change out costly filters. An automated cell wash down sequence removes grease that has been extracted from the airstream.

The advantage of Franke’s new Hood Mounted UVC Module is the bulbs are contained in a removable cartridge, which is designed to fit in a sink or warewasher for cleaning. Also, the unit mounts on top of a low proximity hood, which makes the bulbs easier to access than when installed behind filters. All the electronics are contained in a compartment on the door, out of the airstream and away from the grease.

The AutoMist system from Restaurant Technologies automatically cleans grease from hoods, flues and fans daily with a detergent-and-water spray mist through sprayers along the hood and up the flue to the exhaust fan. The system prevents oil and grease buildup, mitigates fire risk and eliminates the need to bring in an outside cleaning crew and shut the kitchen down for a quarterly hood cleaning. Operations with the AutoMist system installed may be eligible for discounted insurance programs. 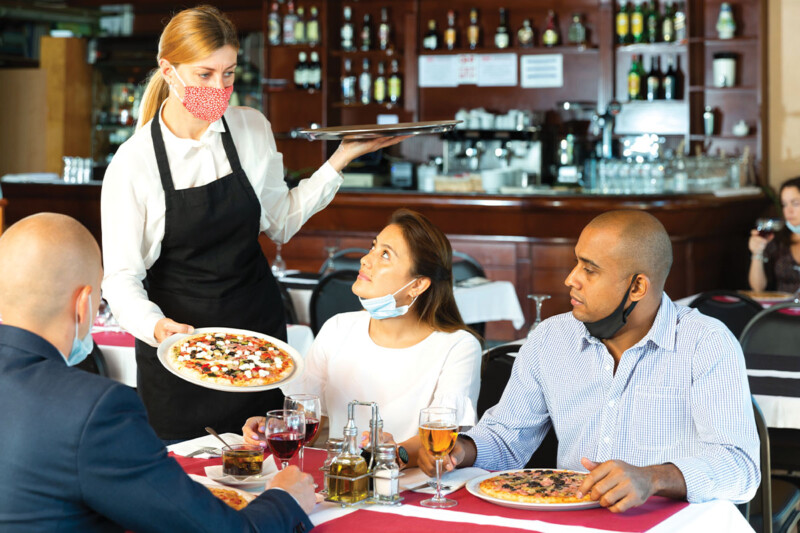