Smallwares & Tabletop: The Future Is Now! 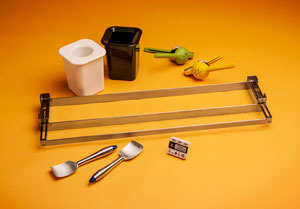 When you host a Smallwares & Tabletop Competition in a venue that includes a fully equipped commercial demo kitchen—as we did at The Boelter Cos. SuperStore’s recently opened Event Center in Milwaukee—it’s only a matter of time before your operator and dealer judges are over at the cookline gauging the merits of various finalists.

And we loved it! Comments such as “this entry needs a camlock so you don’t have to keep an Allen wrench in the kitchen” to “the handle could be more ergonomic” to “where’s some whiskey so we can test out this whiskey glass?” and “can we get a few limes to check out that juicer?” were just a few snippets overheard during the judging process.

In the end, 12 products emerged as winners from the field of 48 finalists in Foodservice Equipment Reports’ 2016 Smallwares & Tabletop Competition. A group of six judges, made up of smallwares and tabletop specialists from three major E&S dealerships, and three foodservice chef/operators, gave top honors to five smallwares entries from a field of 17 finalists, and seven tabletop entries from a field of 31 finalists.

Three, Two, One…Go!
As usual, the wide variety of finalists delighted the eye and the ear. A set of defiantly purple baking pans (tailored for allergen-sensitive kitchens) stood out on the Smallwares side display area. Delicate bone china and sturdier porcelain plates and serving platters added elegance and color to the Tabletop side of the room. Melamine platters disguised as pottery—or marble and slate—fooled the eye. As for sounds, judges tested timers by turning the dial and listening (“might not be loud enough for my kitchen,” was one verdict), tapped on wine glasses to listen for the crystalline “ping,” and cranked the handle of a vegetable noodler.

Our six judges who rated the products collectively brought a wealth of foodservice experience and different perspectives to the table. Our three chef/operator judges were Chef James Jens, Founder and Owner of Dinners With Class, a catering company based in Cedar Grove, Wis.; Chef Ryan Neach, former head of kitchen operations for Maggiano’s Little Italy restaurants at three Illinois locations: Oak Brook, Schaumburg and Skokie; and Brewer Stouffer, Founder of The Roman Candle Pizza Co., a five-units-and-growing chain based in Madison, Wis.

The team’s varied backgrounds led to well-balanced evaluations. For example, our dealer judges gave high marks to a cafeteria serving tray wrapped in marketing-message graphics—recognizing its value to noncommercial clients. But our operator judges, who come from catering and higher-end restaurant backgrounds, were not aware of its usefulness to a different segment until discussion ensued between the panelists. “[That level of graphics] on a tray is a game-changer,” one dealer judge summed up. The tray became one of our winners as a result.

Play By The Rules
FER editors define Smallwares as back-of-house tools—usually handheld, sometimes countertop items, but always free of motors (although batteries in items such as scales are allowed). Tabletop/Servingware candidates include anything that would be used on a well-dressed table, buffet or serving area. Disposables also have been added to the Tabletop category.

To be eligible, products had to be new to the market since the May 2015 National Restaurant Association Show. All entries were prejudged by FER editors. Entries that met the criteria continued in the competition as finalists. Manufacturers were asked to submit the actual items for judging.

Anne McCabe serves as V.P.-National Accounts, working out of the Wood Dale, Ill.-based office of The Boelter Cos., Waukesha, Wis. She’s in charge of developing new business opportunities across the country. McCabe’s previous role with Boelter was leading the company’s Supply Division for Illinois and Michigan. McCabe has served with the distributor for 29 years.

Chef Ryan Neach is the former head of kitchen operations for Maggiano’s Little Italy restaurants at three Illinois locations: Oak Brook, Schaumburg and Skokie. During his nearly 20-year career with Maggiano’s, Neach has served as executive chef since ’03, assisted in restaurant openings and held the role of chef-partner for four years, to name a few achievements.

Brewer Stouffer is the Founder and Owner of The Roman Candle Pizza Co., a casual dining neighborhood pizzeria focusing on craft and authenticity, based in Madison, Wis. Since opening in ’05, he has grown the brand to five locations in Madison and Milwaukee. The Roman Candle became a franchisor in ’15. Stouffer currently oversees operations and takes a hands-on approach to improving systems and process.

Kim Zohfeld currently serves as a Category Manager/Smallwares for Edward Don & Co., Woodridge, Ill. During her nearly six years with the company, Zohfeld has covered categories ranging from disposables and paper towels all the way to buffet, kitchen and table service. Recently she has added linens and fuel to her responsibilities.