How Restaurants Are Adopting Front-of-House Technology To Save Labor 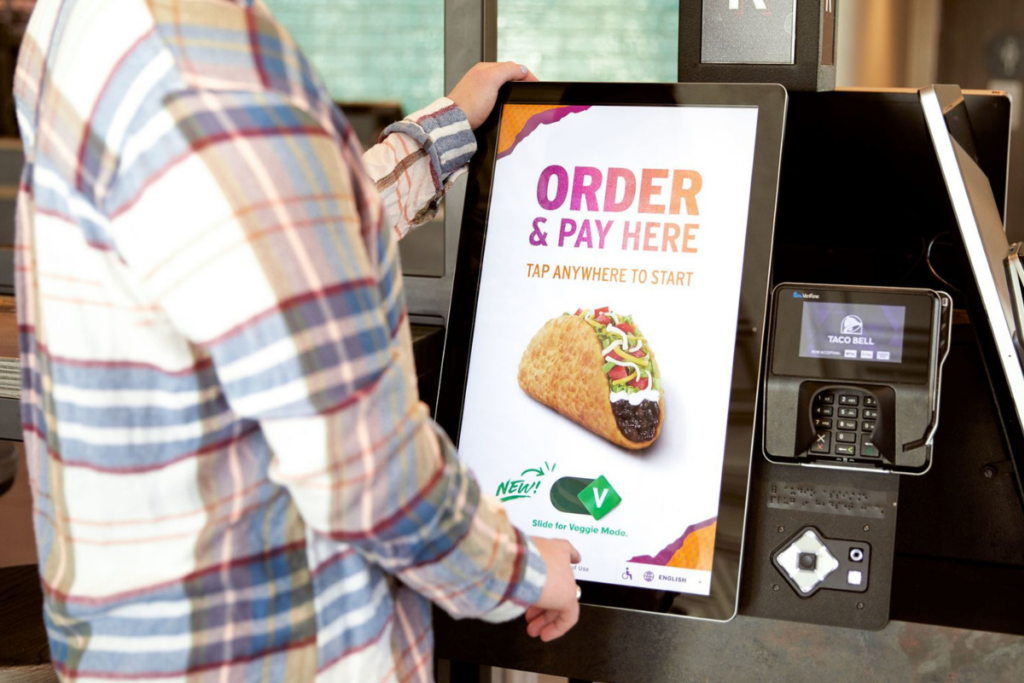 More brands, like Taco Bell, are leaving ordering in the hands of customers through self-service kiosks. Courtesy of Taco Bell.

A labor shortage has been plaguing the foodservice industry long before it was exacerbated by the pandemic. Just two years before COVID-19 hit, the industry was struggling to fill positions as rapid growth in the quick-service segment left operators with supply-and-demand issues. And there, again, were labor challenges nearly two decades ago when McDonald’s began testing ordering kiosks to beef up efficiencies.

And while that technology didn’t become mainstream then, self-service kiosks and other types of labor-saving tech—like temperature-controlled lockers for to-go orders and automated drive-thru attendants—are gaining footing now as the technologies have gotten better and more affordable, putting them within reach of operators, all while the consumer has gotten more tech-savvy.

FER spoke with Jay Bandy, the president of Goliath Consulting Group, about what he’s seeing when it comes to restaurants adopting front-of-house, labor-saving technology and how it’s becoming a win-win for both the operator and the consumer.

FER: Earlier this year, Steak ‘n Shake replaced dining room staff with self-service kiosks, and Rise Southern Biscuits invested in new kiosks and heated lockers to tackle the labor shortage. Do you think all this technology is here to stay post-pandemic? Why or why not?

BANDY: Yeah, I definitely think it is. The reason that the self-order kiosk is going to continue to grow is because the world interfaces right now with a 3×6” monitor throughout their day, right? And so it’s a number of people that have adapted to living their life through their phone, so it just makes the kiosk a logical next step. It eliminates that human interaction, which a lot of people are actually looking for on the consumer side. They’d rather just go to a computer screen and order. Look at Starbucks. It’s a steady stream of people that order on an app that are just picking up coffee or whatever it is they order from Starbucks, right? So there’s already conditioning in place with people using apps and ordering food. A kiosk is just a big app. It’s an easy transition.

“So there’s already conditioning in place with people using apps and ordering food. A kiosk is just a big app.”

And another thing that’s interesting with the heated shelves and the kiosk ordering, it’s really a form of an automat. Automats came back in the last couple of years in various cities, and it’s basically a container that holds your food. And, of course, it’s an electronic way to order, but what’s interesting is if you look at the history of the automat, the automat was the product of the Spanish flu back at the turn of the last century. It was a way for people to get their food without interacting with people. I just think now it’s more likely to have traction and make up a much bigger percentage of transactions.

FER: In your Virtual NEXT session earlier this year you mentioned you were trying out an automated order-taking attendant using artificial intelligence, and Wendy’s just announced it will begin using AI tech in its drive-thru. How do you see this type of technology being adopted?

BANDY: On the drive-thru side, automated ordering is going to take off in the next couple of years. There’s a lot of big chains involved in projects right now, and just from my experience working with AI in the drive-thru, I see, in the next five years, most chain drive-thrus will have an AI attendant or the ability to have an AI attendant. The technology is there; it’s just a matter of getting people to accept it.

FER: Some of these automated attendants are so realistic. Do the customers even necessarily realize they’re not talking to a person?

BANDY: That’s kind of the thing, right? It’s, “Do you really want the voice not to be a little robotic if you’re not talking to a person?” Because part of the pushback with AI is people want to know when they’re talking to a machine and when they’re talking to a person. I talk to a lot of the companies that do AI call centers for pizza chains, and a lot of excellent fast-casual chains now have gone to AI call centers that were people call centers, human call centers. And what I learned from them is that you want to make sure that you’re not trying to fool the customer into thinking it’s a person.

FER: Anecdotally, how do you think customers are adapting to these types of technologies?

BANDY: I think they’re doing well. I pay attention to behavior just because when we recommend these technologies we want to make sure they work. What’s interesting to me, go to a grocery store, and watch people. That really gives you a glimpse of how people interact with technology. I live in Atlanta. When I go to Atlanta and I go to the Kroger and I look, there’s just a mass of people that are at the self-checkout. It’s just how people are. They want to go to the self-checkout. They want to get it done.

Well, I was in western North Carolina weekends ago, and I was at Lowe’s. I was shopping, and I picked up some stuff. So I go to the self-checkout, and there’s nobody there. There are 12 people in line at the checkout with a person. And the reason I say that is folks in urban areas are much quicker to adapt to technology and these interfaces than folks in rural areas. It’s just because they’re not exposed to it as a culture. It’s a whole lot of things. So that’s interesting as you look at these technologies, and we do at the restaurant level and staff. But if you look at it from the consumer side, you really have to be aware of who your customer is and where you are to make sure the technology fits their lifestyles.

“But if you look at it from the consumer side, you really have to be aware of who your customer is and where you are to make sure the technology fits their lifestyles.”

FER: So how does that affect chains that are trying to roll this out across their systems?

BANDY: Exactly! If you’re McDonald’s or Taco Bell or any of those guys, you have a quandary because you’ll have easy adoption in some markets and difficult adoption in other markets. So you’ve got to be willing to be flexible. The good news is with the kiosk technology, it’s a plug-in, so operationally, back of house, it doesn’t change anything. Obviously, it changes the front-of-house service model. One you’re going to need more people than the other, but the good thing is it is a plug-and-play solution for existing construction. For new construction, though, if you build a restaurant and you’re going to use a kiosk, your whole front counter configuration is going to look different. And also, I think the whole technology works well with cashless restaurants because most kiosks don’t have the ability to take cash, so you’ve got to have somebody at the front counter to handle that cash transaction.

FER: What other front-of-house technology have you seen in the past year that has helped operators save labor?

BANDY: There’s more technology growing on just looking at customer flow and just measuring that, so that’s definitely one area that I think technology is getting better at, predictive analytics on who’s coming in, when they’re going in so that you can schedule appropriately.

FER: Along with reducing labor needs, are there any other benefits for operators that you see with this type of technology?

BANDY: Honestly, the big thing is the AI at the drive-thru and the kiosks at the front counter; that’s a huge impact for quick-service restaurants, for fast food. When you do the numbers on that, it’s a significant savings in labor if you can have both of those technologies and also a more efficient operation on top of it. So, it’s not just a labor savings; it’s the ability to just actually offer a better service, more consistent service experience for the guest. And also the numbers show that people are going to order more food, and if you program them right, they’re going to suggestive sell every time. So, there’s a lot of advantages to a kiosk and having it incorporated within a front counter setup.

FER: What do you think restaurants’ front-of-house will look like in the future?

BANDY: I think for a lot of concepts there’s going to be one person in the front of the house in fast-casual and quick-service restaurants. That person is going to take care of making sure the dining room is clean, and the beverage station is right and answer any questions for guests and act as a front counter expo to make sure guests get their orders. And that’s all the front staff there’s going to be in restaurants. I truly think it’s going to go that direction. To me, again, with people adapting to technology and technology being such a big part of life, I think the consumer is actually going to be more comfortable going into that kind of setup than they are in today’s environment.

Editor’s note: Responses have been lightly edited for clarity and brevity.